Over the past several of years, major and minor shifts in policies and regulations have changed how Chinese businesses can operate. Manufacturers in China have enjoyed a distinct advantage in in lax environmental regulations, low material costs and labor rates giving the freedom to conduct themselves in a minimal cost environment. In conjunction with explosive GDP growth, these conditions have given foreign supply chains low-hanging and profitable fruit for a number of years to develop and reap the benefits of this climate.

Factory closings and mistreatment of migrant workers do not sound like the stuff of a booming economy. Such is the dichotomy of a totalitarian system satisfying the needs of 1.4 billion citizens and the global commercial consumer that fuels the same. These shifts in both imposed policies and social change have and will continue to put pressure on supply chains with expectations of “business as usual” for the foreseeable future.

In recent years, the government of China yielded to international pressure and their own desire to be solid world citizens and instituted a crackdown on environmental regulations. Moves like this were as swift as they were impactful in a place where referendums don’t exist. This led to the forced closures of many factories. In some cases, factories were closed long enough to implement remedial actions; in others, they were closed permanently.

In the Province of Heibei, the number of foundries was reduced from 900 factories to 150 in less than one year. In the fall of 2017 in Zhejiang Province, virtually every factory engaged in commercial surface treatment such as zinc and nickel plating or powder coating was closed for four to six weeks. These shutdowns were seemingly random yet had a dire impact on the ability of factories to deliver as promised to the supply chains who relied on them. The regulatory enforcement and factory closures led to an increase in raw material cost and lead times. Just as importantly, regulatory enforcement had the biggest impact on the smaller production facilities, shuttering most, and pushing raw material orders to the larger producers with higher minimum order sizes. All of this raised costs and lengthened lead times.

Equally crippling to manufacturing companies that relied on a diminishing labor force was coping with the expansion of the middle class and their movement to urban areas. As factory labor requirements increased, the labor pool expanded to surrounding areas. To balance this movement, the Chinese government had to mitigate the impact of an unplanned population increase that created demands on the pre-surge infrastructure. 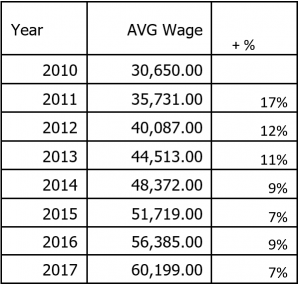 To local government, it was not desirable for a family living in one province to migrate to a new one and receive simple amenities such as schooling. In some cases, neighborhoods of people from outside the province sprung up only to be summarily turned back by local governments. Entire schools were shut down because they catered to migrants. This imposed stress on the available workforce has led to worker shortage and higher wages. As a result, labor costs in China have doubled since 2010.

Supply chains that followed the growing trend of integrating Chinese exports are feeling the sting of these shifts. To add insult to injury, the U.S. dollar has weakened to the tune of 7-8% against the Chinese Yuan since the middle of 2017. While raw material cost is just a percentage of manufactured goods, fluctuations in exchange are directly proportional to the cost of goods sold. Moreover, Chinese banks all but halted the practice of allowing local companies to hedge currency on future business, creating another variable (and risk) Chinese manufacturers had to factor into their costs.

The future of supply chain utilizing China-based manufacturing remains viable even under the pressures of regulations and social changes. However, it is wise to think that conditions under which goods are made and delivered from China will be subject to abrupt and unexpected changes and to plan accordingly.